15 Creepiest Abandoned Places in the World

Cementerio de Trenes — aka the Great Train Graveyard — is a haunting place. Located on Bolivia’s desolate salt flats, countless locomotives litter the landscape here, rusted and decaying, and never to take to the tracks again. this is a place for train buffs — although the sight that awaits can be distressing. Once-great engines have been allowed to rot beyond all recognition. It feels like such a waste. Uyuni — just three kilometers from here — was meant to be a major transportation hub, linking South America’s great cities and connecting the continent. yet it never quite happened and the imported locomotives, many of them transported from Great Britain, were neglected and allowed to fall into disrepair. Long since stripped of all their valuable parts, vandalized and corroded by the salt winds, there’s something sad about the hollow shells that remain. 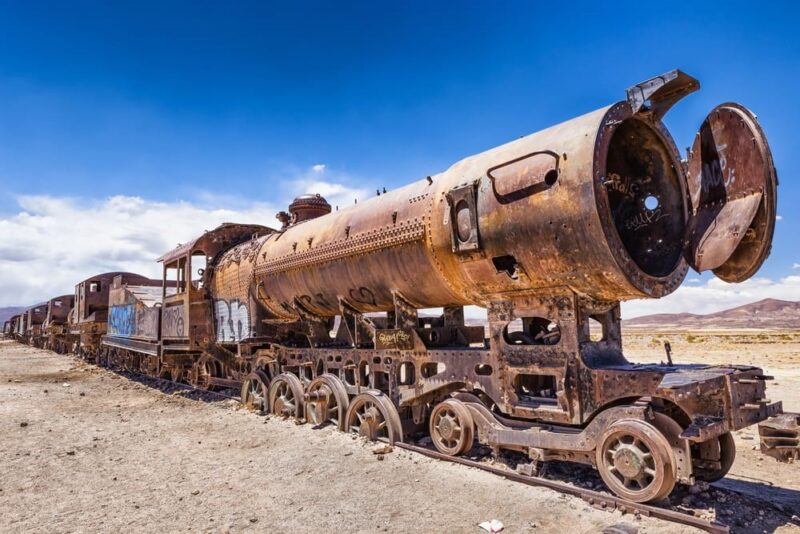 2.The Ghost Town of Namibia

Located in the Namibia Desert, not far from Lüderitz, Kolmanskop was once a thriving mining village. Precious diamonds were discovered here in 1908 — prompting a boom and a surging population of prospectors. these days it is a ghost town, abandoned and being reclaimed, little by little, by the desert. The desolate buildings here being buried beneath the shifting sands, it is a haunting place. there was once a hospital, ballroom, school, theatre and casino here — as well as the first tram in Africa. But the diamond rush didn’t last long and, supplies depleted, people began to leave in order to seek their fortunes elsewhere. 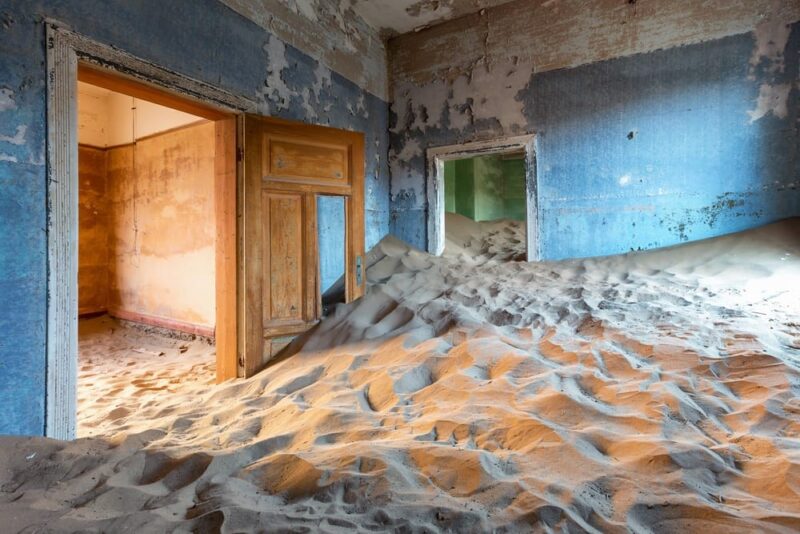 Located on a Cliffside, opposite a spectacular waterfall and not far from Bogota in Colombia, the Salto Hotel boasts views that are to die for. Unfortunately, death is a common theme in these parts. legend has it that in ancient times, indigenous people would jump from Tequendama Falls in order to avoid being captured by Spanish conquerors. More recently, this has become a noted suicide spot, where countless lives have been lost.

Built to serve Chernobyl and house those who worked there, Pripyat found itself on the front line in 1986, when disaster struck and a reactor at the doomed nuclear power plant exploded. more than 49,000 people once lived here — and all were evacuated within 36 hours. More than 30 years on, the result couldn’t be more eerie. homes, shops and schools stand empty, with Pripyat having been ruled unsafe for human habitation for the next 24,000 years. It is possible to visit these days, although strict conditions and guidelines must be followed, with not all areas considered safe. 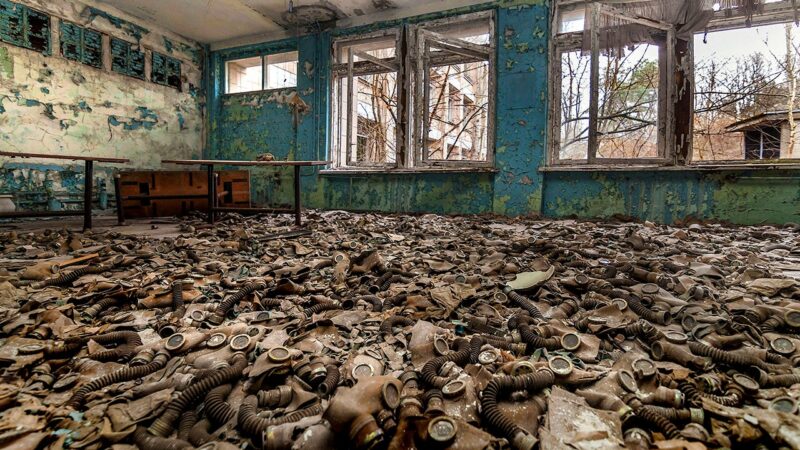 5.The Abandoned Military Hospital in Beelitz

The abandoned hospital at Beelitz Heilstatten is an unsettling place. These days it is decaying — the plaster peeling, the walls crumbling and weeds sprouting from the deep cracks and crevices. but once it was a military hospital that, for a time, treated injured German soldiers and Nazi officials. For a short period, a wounded Adolf Hitler was amongst the patients here. Just thinking about it is unnerving. 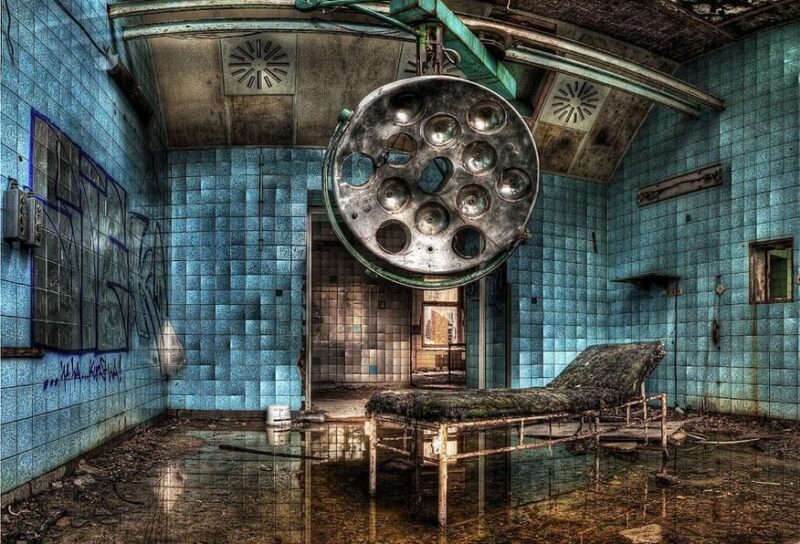 Entering New Bedford’s imposing Orpheum is like taking a step back in time. This stylish theatre and movie house was opened in 1912 — on the same April day that Titanic sank, en route to the United States — but having closed its doors to customers in the 1950s, it has long been abandoned and decaying. located on Water Street in the small Massachusetts city, it is a significant local landmark. Yet few here get the chance to take a look behind the scenes. 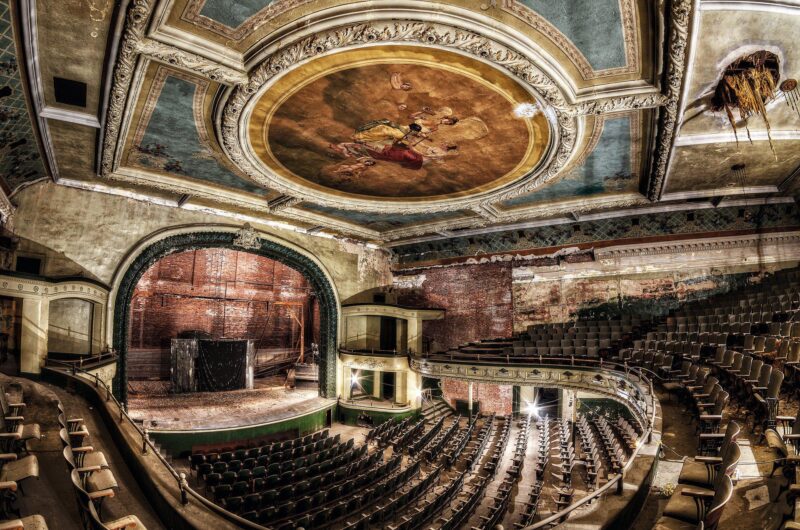 Sydney’s so-called ‘Floating Forest’ makes for a strange tourist attraction. Located in Home bush Bay, just outside the city’s bustling Centre, this is a remnant from Australia’s past that has survived the area’s dramatic regeneration. lush green mangrove trees protrude from the great rusting hull of SS Airfield, brought here in 1972 to be dismantled, but still afloat in the peaceful waters of the scenic bay. 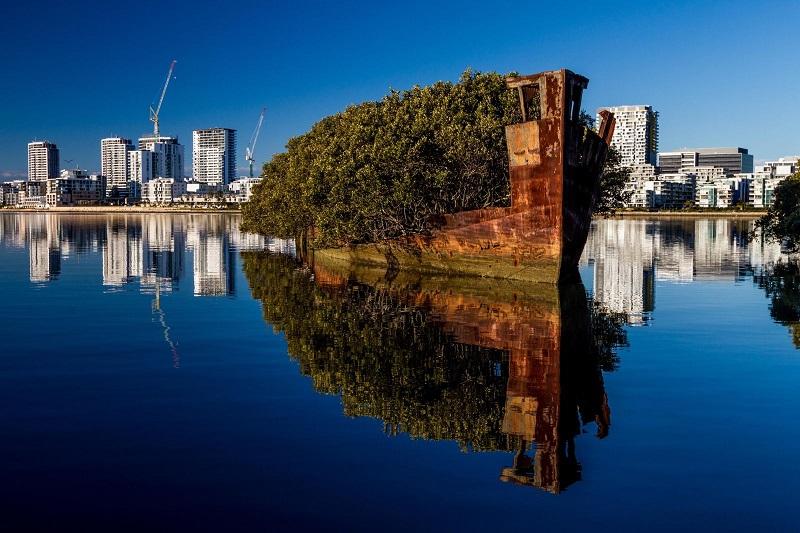 Opened in 1904, City Hall was the original southern terminal station of the New York Subway’s first line. No expense was spared here, with beautiful tiles lining the curved walls, chandeliers hanging from the ceilings and ornate skylights helping to illuminate the picturesque platforms. it’s a sight to behold, although the station didn’t remain in service for long. Impractical due to curved platforms not long enough to accommodate trains of increasing size, passenger service here ceased in the 1940s. In subsequent years, it has become a ghost station. 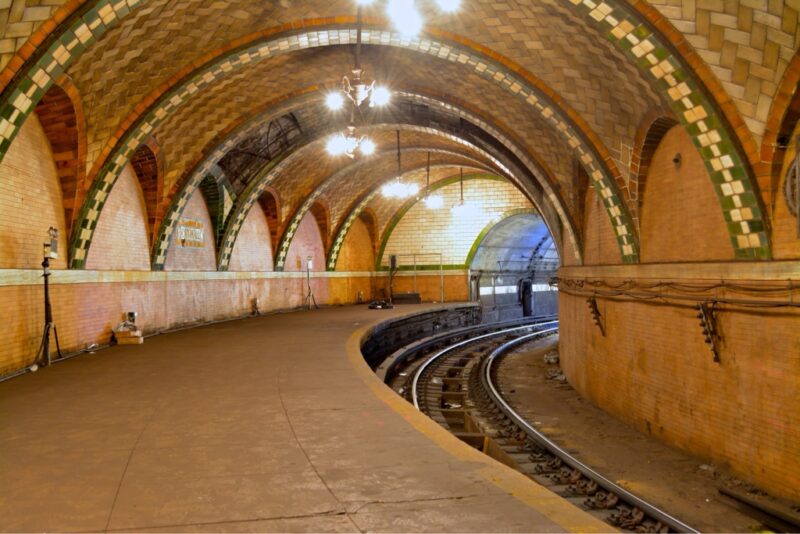 9.The Haunting Valley of the Mills

There is a great deal to see in spectacular Sorrento, but not much captures the imagination quite like haunting Valle dei Mulini. Deep in a great ravine — not far from bustling Naples — nature is reclaiming the long-abandoned buildings. here, in the historic Valley of the Mills, all is calm and quiet. It is sometimes rather creepy, but don’t let that put you off. In the area? Be sure to check it out. 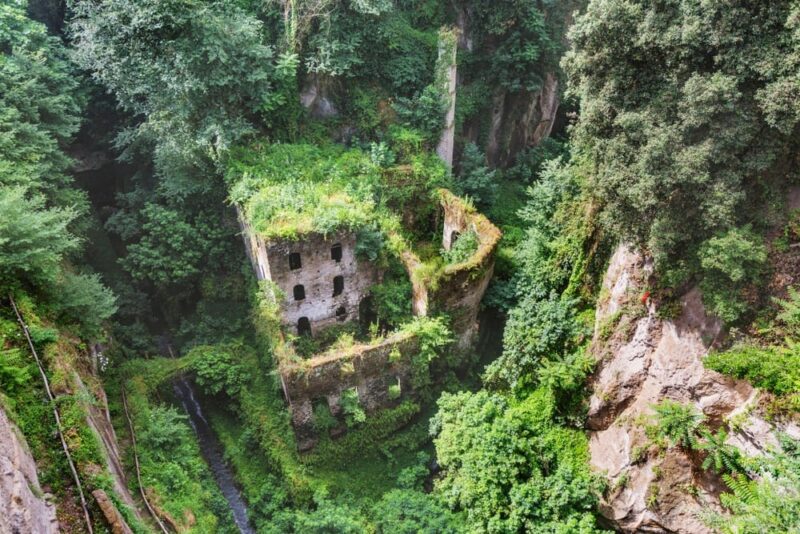 Thinking about paying a visit to Rubjerg Knude? You should hurry, for it isn’t expected to be around for much longer. Located in Jutland, on Denmark’s wild northern coast, this striking landmark has stood here since 1900. yet with the shifting sands and rapid erosion that continue to reshape the coastline here, the abandoned lighthouse is soon set to topple into the North Sea and disappear beneath the pounding waves forever. 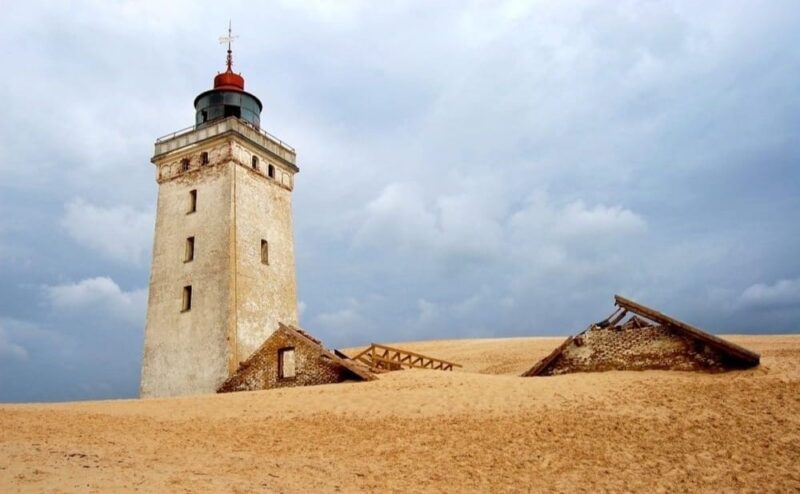 You might recognize Hashima Island from the James Bond movie Skyfall. It makes for a great film location, but the events that make this such a grim place to visit are all too real. located nine miles from Nagasaki, this was once a forced labour camp, where prisoners — prior to and during the Second World War — were brought to work in the offshore coal mines. Conditions were brutal and deaths common. The mines were closed in the 1970s, but the dark mood endures. 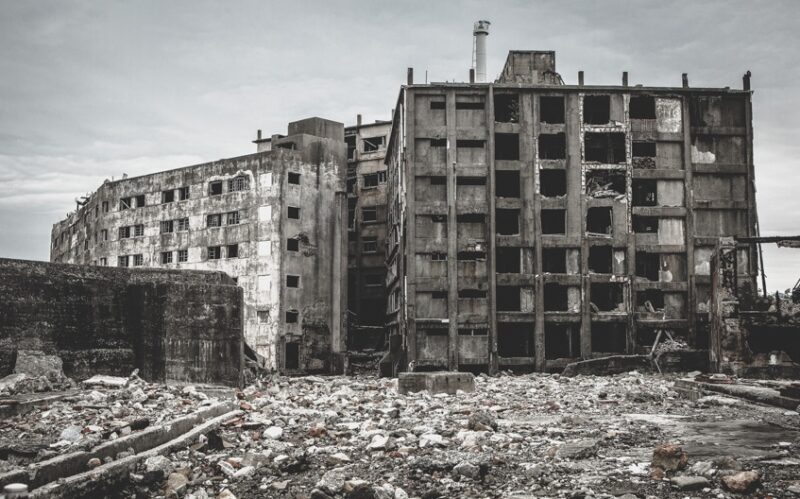 12.The Ghost Town Of Craco, Italy

Perched high in the craggy hills of Matera, in spectacular southern Italy, Craco is a ghostly place. This was once a thriving town, its location boasting strategic defensive benefits during times of strife, but whilst hostile raiders struggled to penetrate its walls, Mother Nature had no such issues. straddling various fault-lines, Craco was flawed from the beginning. The town having long been abandoned, coming here is a creepy experience. 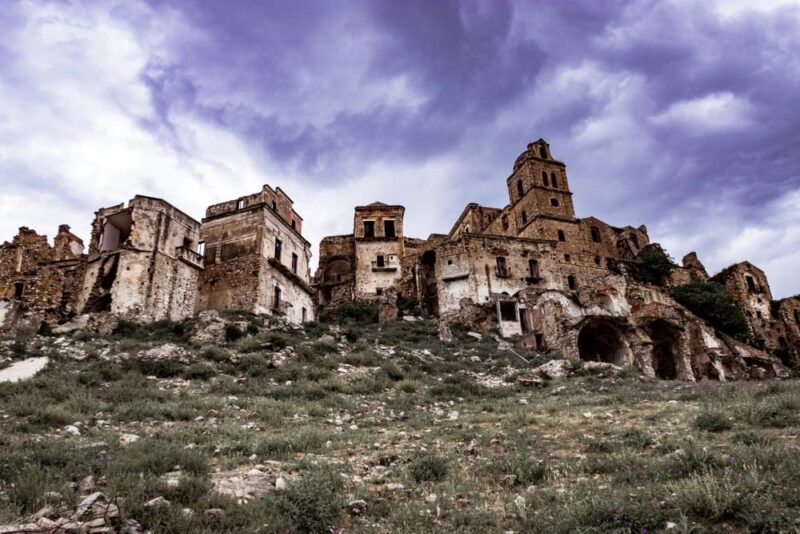 Located not far from downtown Philadelphia, ESP is a world away from the bustling city streets that lie just beyond its castle-like walls. Once renowned as the most expensive prison on Earth, the former ‘residents’ here include the infamous mob boss Al Capone. closed since 1971, it is a major tourist attraction and National Historic Landmark these days. Yet despite all those who head here to explore, the abandoned jailhouse remains a haunting place to visit. 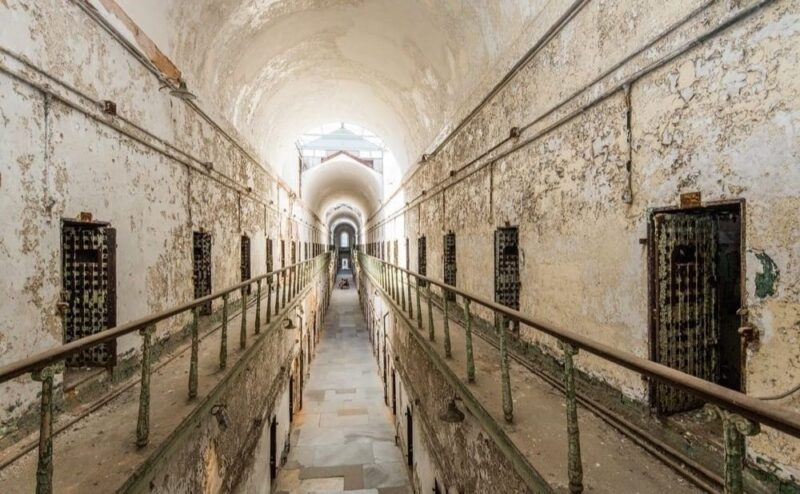 14.The Ghost Town Of Bodie, California

Forever frozen in time, Bodie is a classic ghost town — its decaying buildings and deserted streets unnerving those who head here to poke around in the past. it’s hard to believe that several thousand residents once lived here, some 75 miles from Lake Tahoe, with the imposing Sierra Nevada mountain range providing a spectacular backdrop. 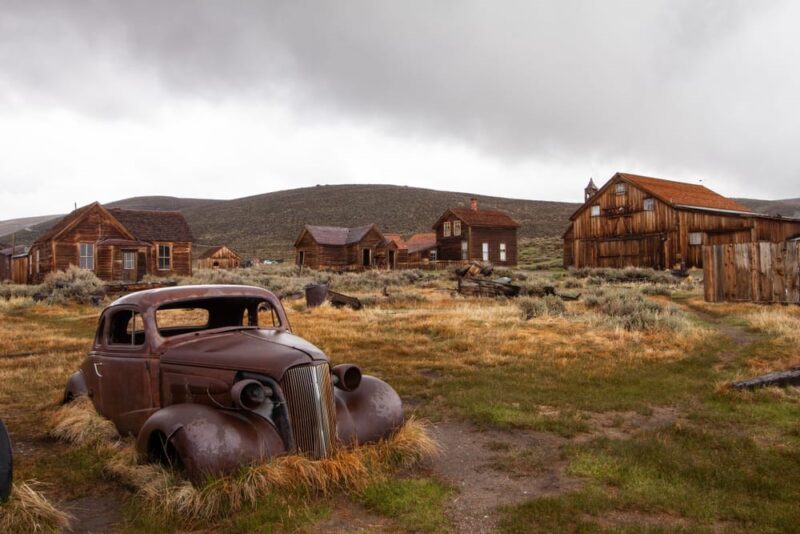 Located in Monceau-sur-Sambre, the immense IM Plant once powered Charleroi and its surrounding towns and villages. Looming over all, the great tower here could cool 480,000 gallons of water per minute. It was a power station both efficient and mighty. The trouble was, it was also a major polluter. studies found that IM was responsible for 10% of all carbon dioxide emissions in Belgium — prompting protests from Greenpeace and the plant’s eventual closure in 2007. Since then, it has beckoned urban adventurers, keen to explore its dystopian structures. 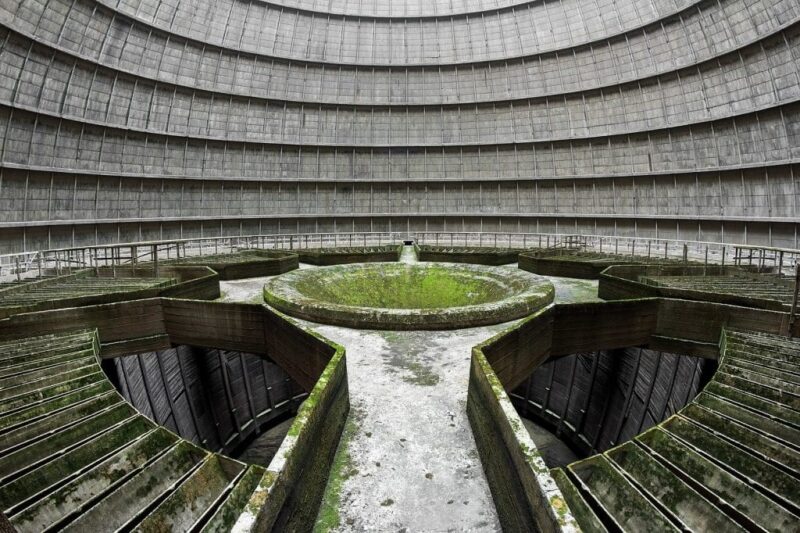