While the Smithsonian National Air and Space Museum didn’t officially open until 1976, the institution’s relation to aviation began at its creation with the first secretary of the Smithsonian, Joseph Henry. The physicist invited aeronaut Thaddeus S.C. Lowe to inflate a hot air balloon on the museum’s grounds in 1861, establishing the institution’s dedication to air and space education. The museum details America’s storied past of space exploration and aeronautics trial and error.

The Air and Space Museum takes visitors to the sky, showcasing the amazing technological achievements that have progressed aviation and space exploration throughout the last century. Our fascination with flight is still alive and well, as the museum (and the accompanying Udvar-Hazy Center) is one of the most visited in the world year-after-year. as you may imagine, the historical objects on display are fundamental to the story of flight. The 1903 Wright Flyer owns the distinction of flying the world’s first successful flight, and you can see the groundbreaking flying machine in person. There’s also Charles Lindbergh’s Spirit of St. Louis, the first aircraft to complete a nonstop flight from New York to Paris.

The Apollo 11 Command Module Columbia, the only portion of the Apollo 11 spacecraft to return to Earth, is currently at the Udvar-Hazy Center. Visitors can also see the spacesuit astronaut Neil Armstrong wore during his mission to the moon and touch a sample of a lunar rock brought back from the Apollo 17 mission in 1972.

The boeing milestones of flight hall features the Bell X-1 Glamorous Glennis (the first plane to break the sound barrier), aviation and spaceflight stories and an exclusive mobile experience that will let visitors personalize their exploration like never before. the Air and Space Museum Planetarium is closed until 2022. The IMAX Theater, Observatory, tours, and educational programs will be on hold until further notice. 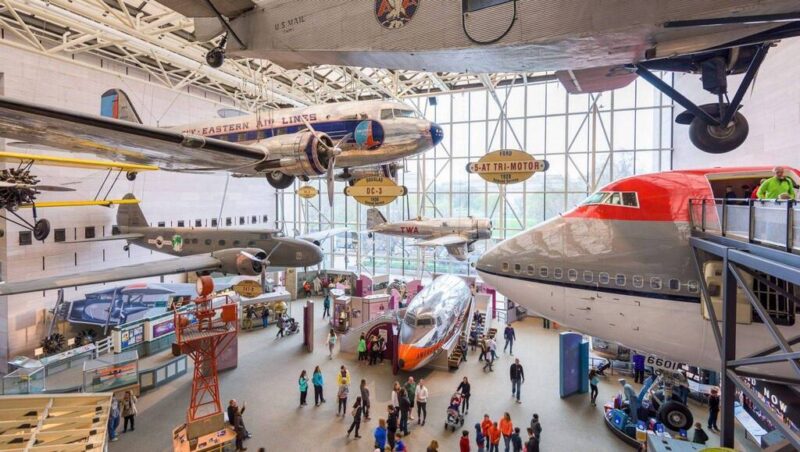