20 Most Beautiful Castles In The World

Mont Saint Michel is located on an island commune in Normandy. The castle was built on an island for strategic regions. for extra reinforcement there are also massive walls surrounding the castle interior.
In the 9th century, the castle was the home of Saint Michel’s monastery. it survived the 100 Years War without being destroyed, and today it is a UNESCO World Heritage Site. One of the castle’s most notable features is the tall turquoise spire with a small golden statue of Saint Michel at the top. 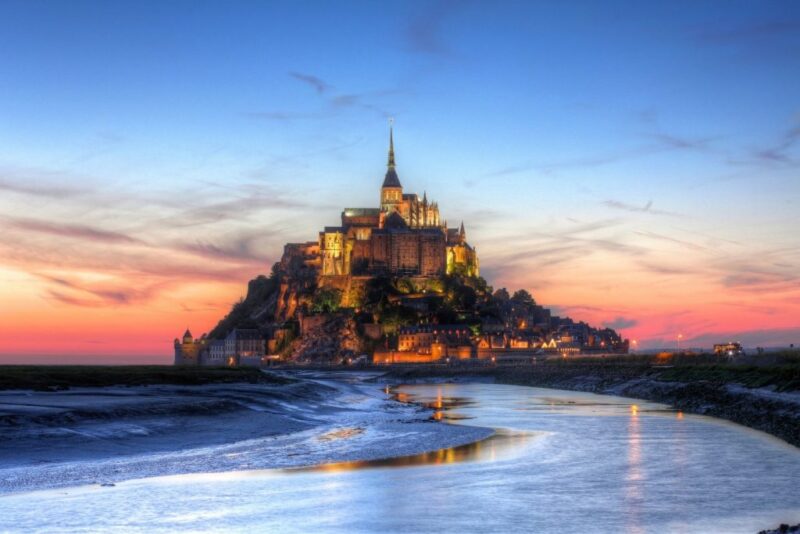 Seven weeks after the death of King Ludwig II in 1886, Neuschwanstein was opened to the public. the shy king had built the castle in order to withdraw from public life – now vast numbers of people came to view his private refuge. today Neuschwanstein is one of the most popular of all the palaces and castles in Europe. Every year 1.4 million people visit “the castle of the fairy-tale king”. In the summer around 6,000 visitors a day stream through rooms that were intended for a single inhabitant. 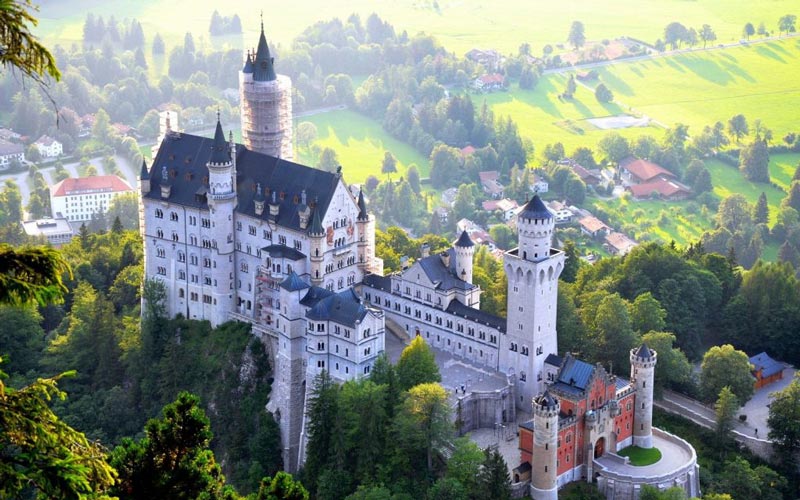 The royal family may be best associated with Buckingham Palace, but it’s this castle in the historic market town of Windsor that has been the family home to kings and queens for over 1,000 years. The castle is a whopping 13 acres, making it the largest and oldest occupied castle in the world. Guests are welcome to tour year-round, and the residence is so massive that three hours are recommended to see it all. 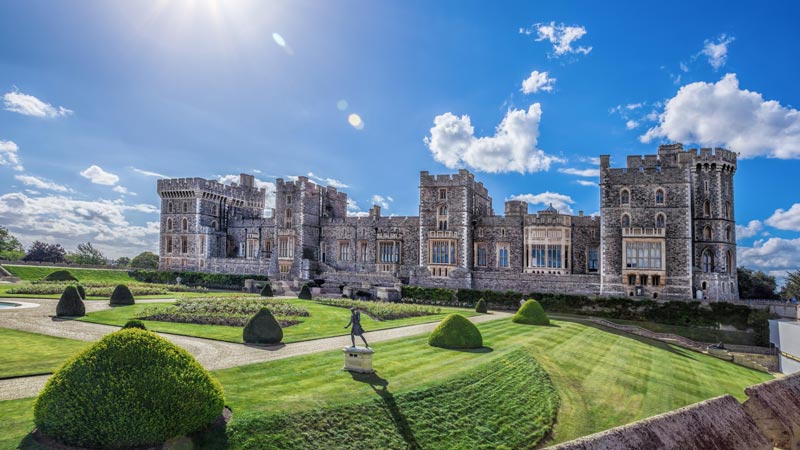 Impressive Edinburgh Castle sits above Scotland’s capital city upon the site of 340 million year old extinct volcano and is the country’s most-visited paid-for tourist attraction. The castle is open year-round to see Scotland’s crown jewels, a howitzer known as the One O’clock Gun, three military museums and the National War Memorial. 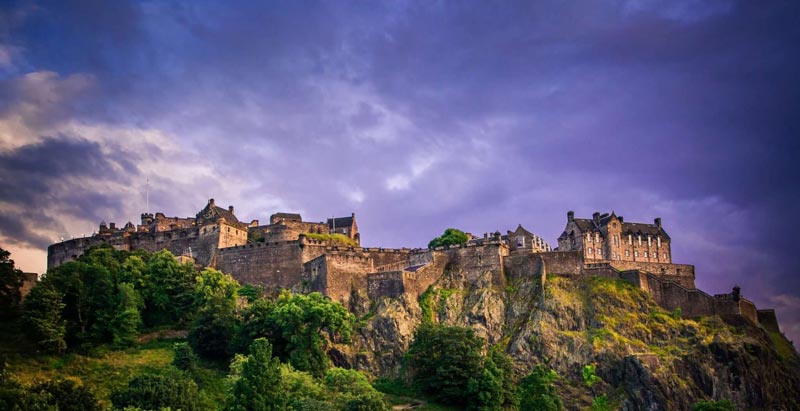 Medieval Eltz Castle, located in Wierschem of western Germany, was built in the 12th century and is named for the family that still owns it today. Surrounded by forest, it was erected on a 230-foot rock and features eight towers that sit 115 feet in the sky. Inside, the castle still includes many of its original furnishings. Other attractions for visitors include a 500-year-old courtyard and a knight’s hall. 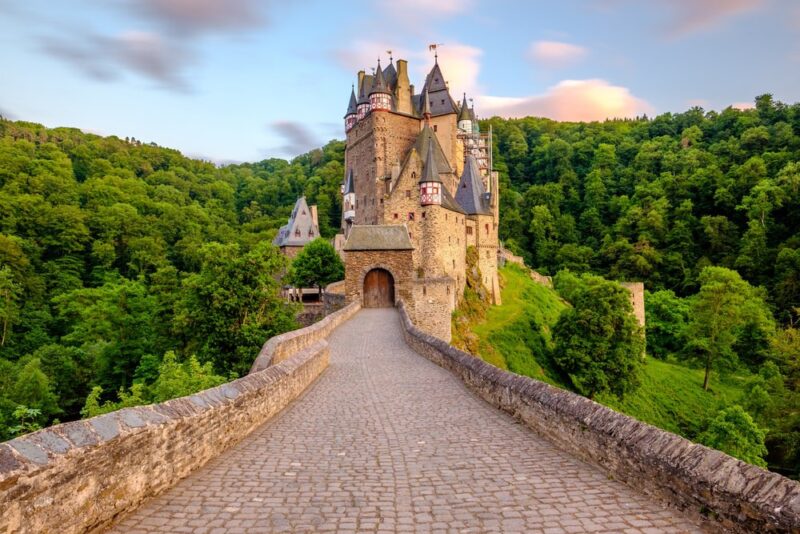 The 13th-century Alhambra palace in Granada, Spain, was named for an Arabic root word meaning something like “The Red Castle,” because of the red clay used to build it. The palace began as a fortress, but soon became a home for royalty, and is now reportedly Spain’s most visited monument. Aside from years of history, the magnificent structure also houses several museums and gardens to visit. 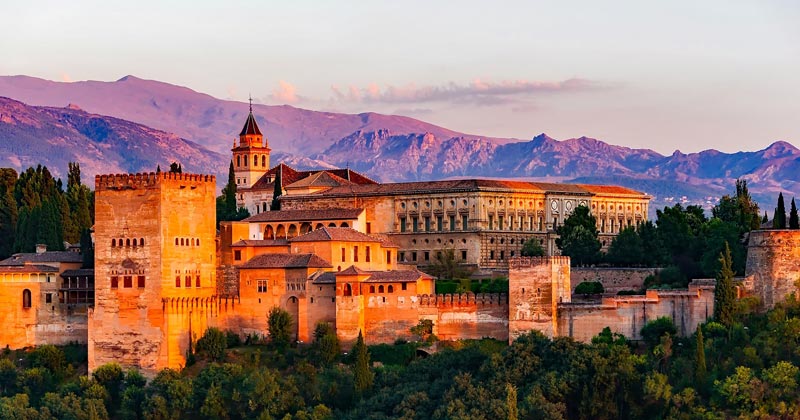 History comes to life at the Château de Pierrefonds in Pierrefonds, France. King Charles VI’s brother Louis, Duke of Orleans, built the grandiose castle in the 14th century, but it was nearly demolished in war and laid in ruins for centuries before restoration in the 19th century to resemble an ideal chateau that would have existed in the middle Ages. The idyllic structure was a filming location for Leonardo DiCaprio’s 1998 film, “The Man in the Iron Mask.” 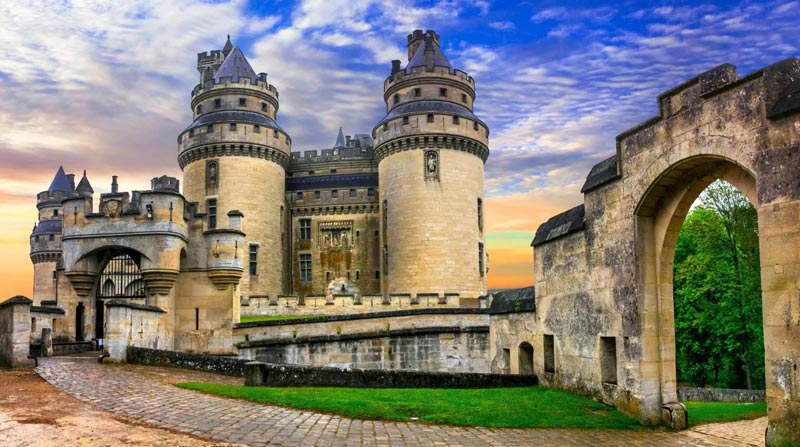 Exquisite Osaka Castle, in Osaka, Japan, was built in 1583 and is especially popular during the spring cherry-blossom season. The now-modernized interior houses a museum about the castle’s history and Japanese leader Toyotomi Hideyoshi The outside hosts, in true castle fashion, turrets, stone walls, a large garden and moats. Movie buffs might recognize this one from the 1955 film, “Godzilla Raids Again,” in which the castle was destroyed by the famous monster. 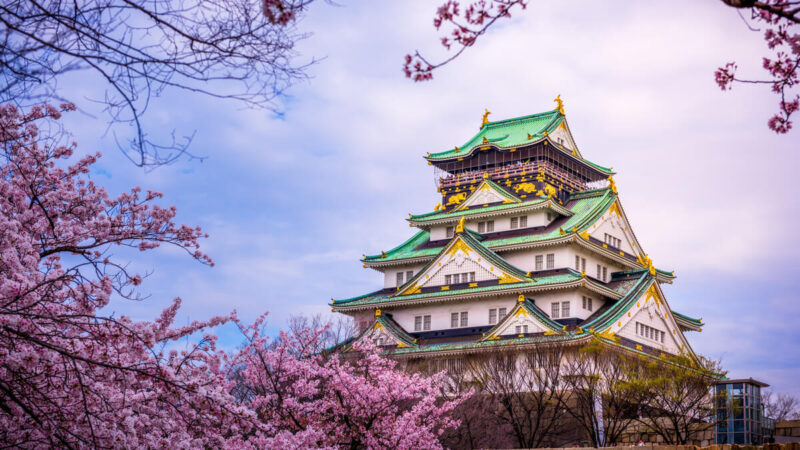 “Downton Abbey” fans know Highclere Castle well: The estate played the role of the breathtaking family home of the Earl of Grantham, his American wife, Cora, their three daughters, and the unforgettable sharp-tongued Dowager Countess of Grantham. The first written records of the estate date back all the way to 749, and its current residents, the Earl and Countess of Carnarvon, open it regularly to the public. 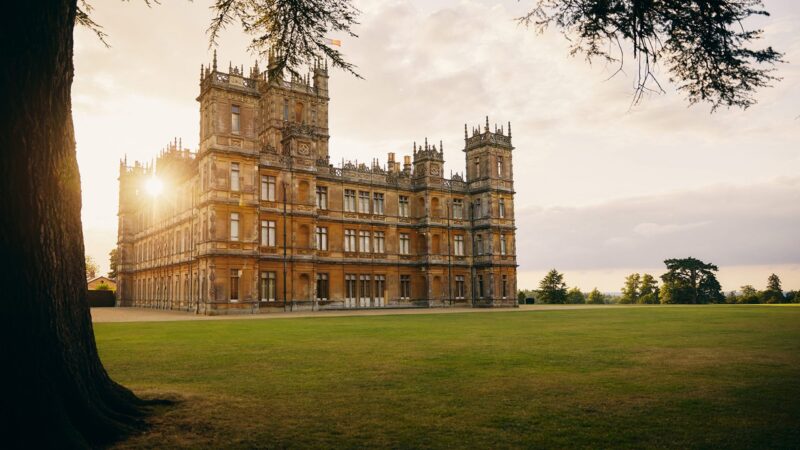 When visiting Connemara in Ireland’s Galway, be sure to snap a photo in front of stunning Kylemore Abbey. Built as a doctor’s family home in 1868, the castle and its walled garden are now home to a community of Benedictine nuns who make and sell chocolates and other goods. Families are encouraged to visit for lakeshore walks, stories of local legends and performances in the neo gothic church. 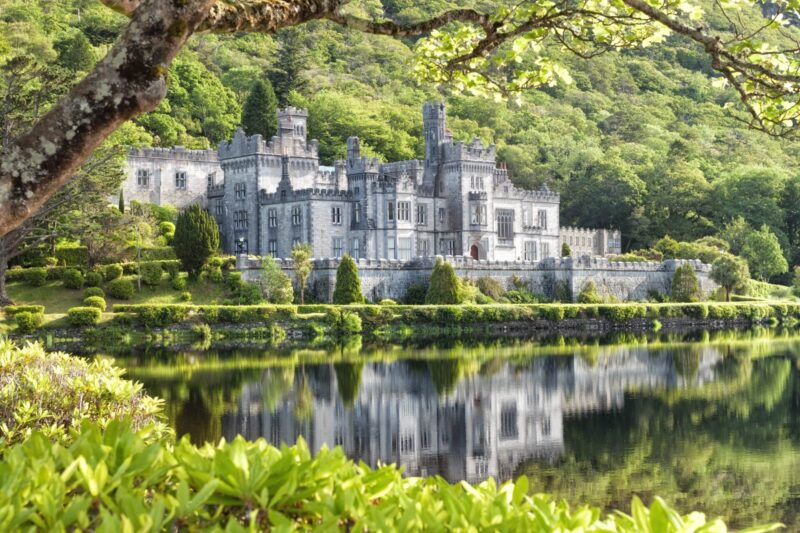 Many castles stick to neutral and natural colors, but not the Catherine Palace, located 18 miles south of St. Petersburg, Russia. The vibrant, Rococo-style palace features a sky blue and white façade gilded with gold. Inside the palace sits the extraordinary Amber Room. Completed in 1770, the room was lined with panels of amber mosaic that featured gilded carving and mirrors so delicate the room had its own caretaker. But then German troops took over the town in 1941 and broke the room down in less than 40 hours. Work to restore the room to its former glory began in 1982 and took over 20 years. 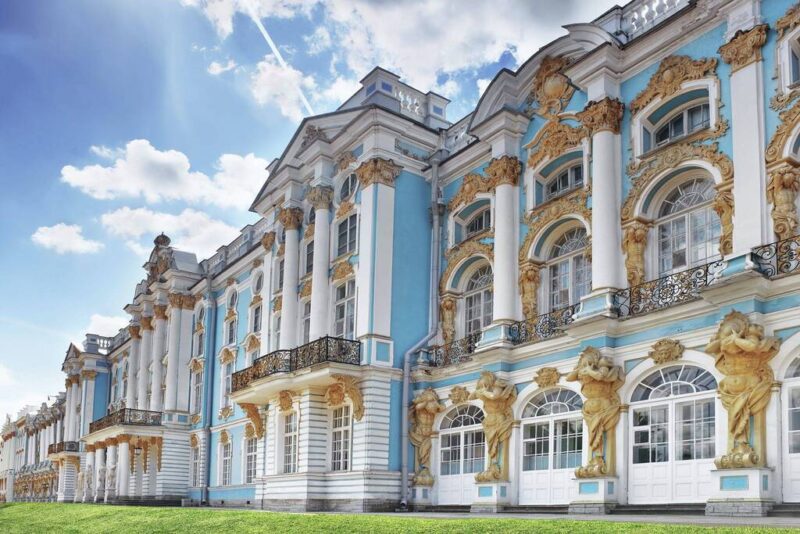 Some people call Bran Castle, located southwest of Brașov, Romania, by another name: Dracula’s Castle. It’s just one of many castles linked to that vampire legend, but its dramatic architecture built on a steep cliff helps it fill the part, and the castle does not shy away from the legend. 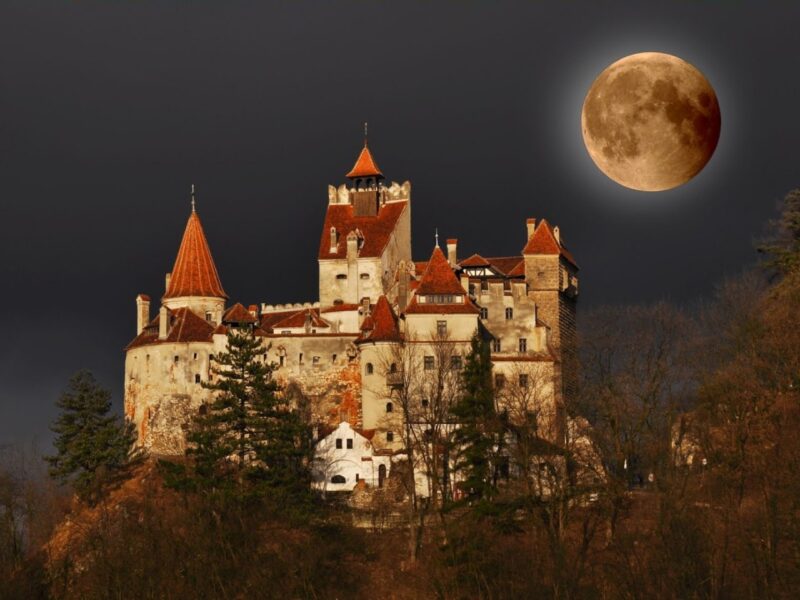 Not many castles are as bold as the Pena Palace in Sintra, Portugal, located on the Portuguese Riviera. The vivid red and yellow exterior walls, originally painted in the 19th century, were recolored to their original beauty in 1996 and the entrance is guarded by a mythical gargoyle. Situated atop the second-highest point in Serra de Sintra, the palace’s terraces offer sweeping views of the town below and the encompassing greenery. 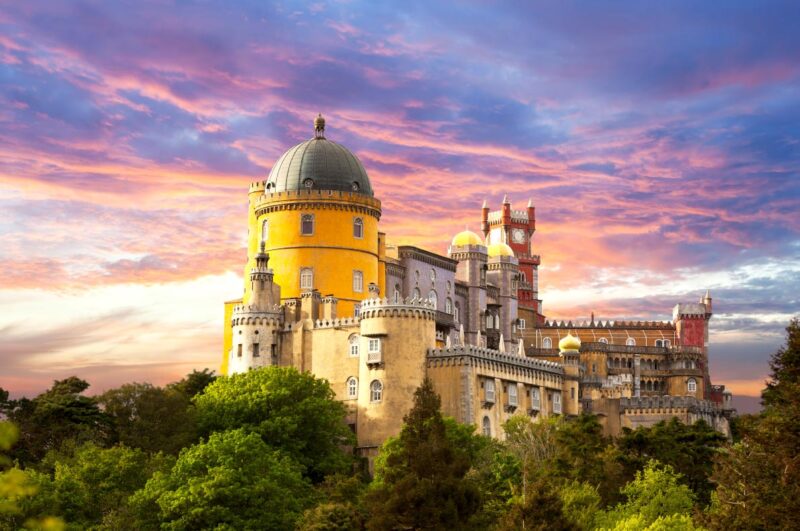 Hold on to your wands, Harry Potter fans, because aspiring wizards can visit the 11th-century Alnwick Castle in Northumberland, England, where several movies have been filmed. It’s here where Harry learned to fly on a broom and play Quid ditch, and where Harry and best mate Ron Weasley crashed the Weasley’s flying car. The castle even leans into its movie fame by offering broomstick training to its visitors. It’s one of many famous movie location you can actually visit. 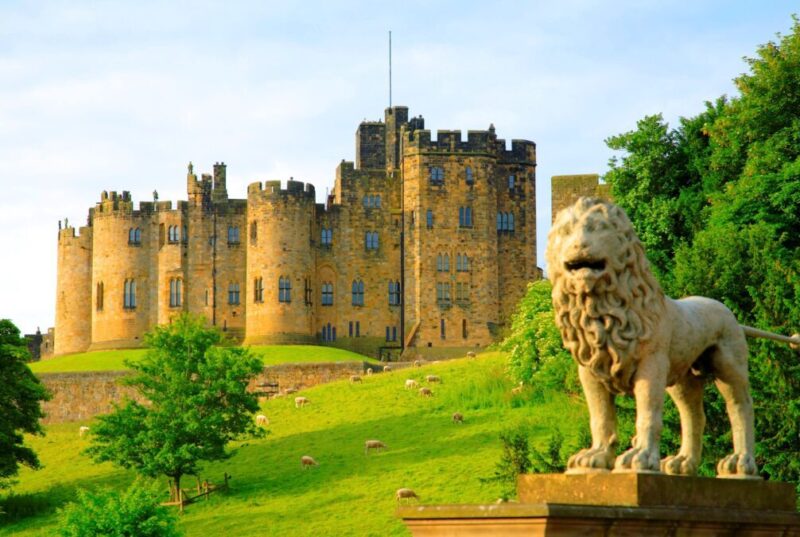 The royal hunting lodge Chateau de Chambord was started in 1519 by the Valois King Francis I. It was favored by kings fond of hunting such as Henry II and Louis XIV. Although never fully completed, Chambord is still the largest chateau in the Loire Valley. Rarely occupied for any continuous period of time, Chateau de Chambord kept much of its original appearance. Some of the interior was altered during the eighteenth century when the chateau was inhabited by Stanislaus Leszczynski and the Maréchal de Saxe but the basic structure is still the unadulterated original – as impressive now as when it impressed Emperor Charles V. 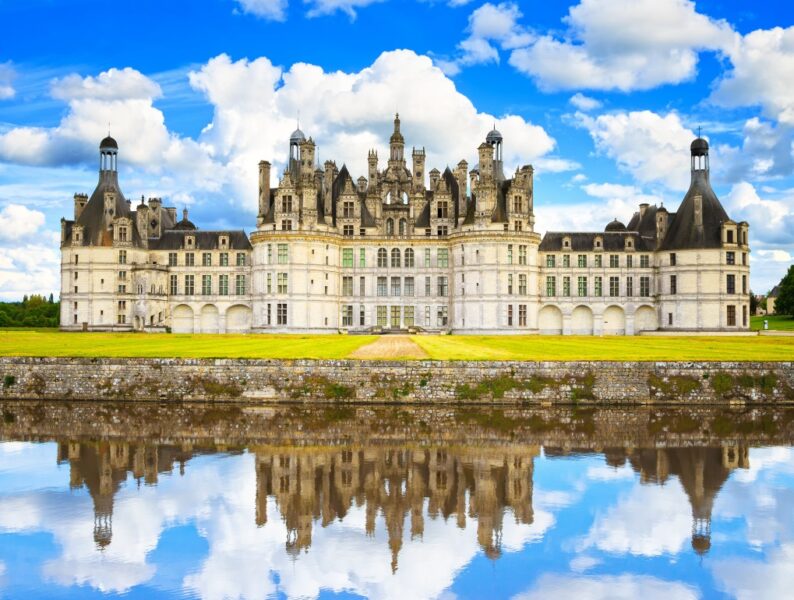 Eilean Donan is perhaps one of the most well-known medieval castles, easily recognized by almost anyone. Partly, thanks to being featured in the 1986 film Highlander, but also as one of the must-see places in the Western Highlands of Scotland. This highland gem is located on an island between three sea lochs – Loch Duich, Loch Long and Loch Alsh. historically, it was a stronghold for the Clan Mackenzie and was established in the 13th century. Unfortunately, the original castle suffered destruction in the 18th century during the Jacobite rebellions and was rebuilt in the 20th century. 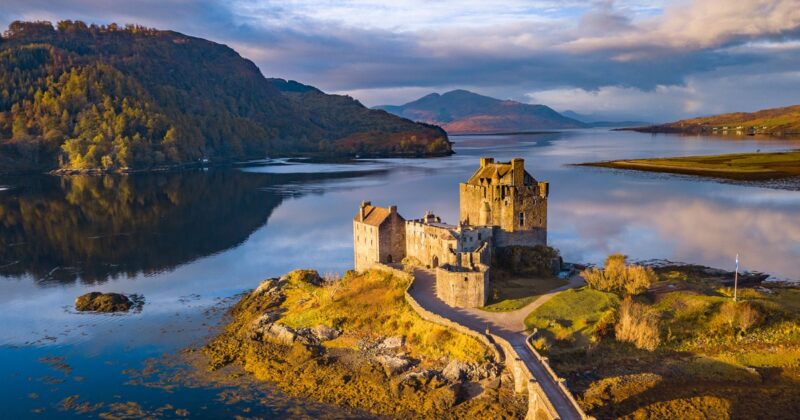 Kilkenny Castle in Ireland is a signature Anglo-Norman stone castle which actually started out as a wooden fort in the second half of the 12th century. Over the centuries the castle has gone through several changes and to this day bears elements of various architectural styles, mainly Gothic Revival. its location historically was a strategic point controlling the crossing of River Nore. These days, the castle is surrounded by vast gardens with manicured lawns, where visitors can slowly enjoy and observe the castle. Visitors can also tour the castle interiors and immerse themselves in historic magnificence. 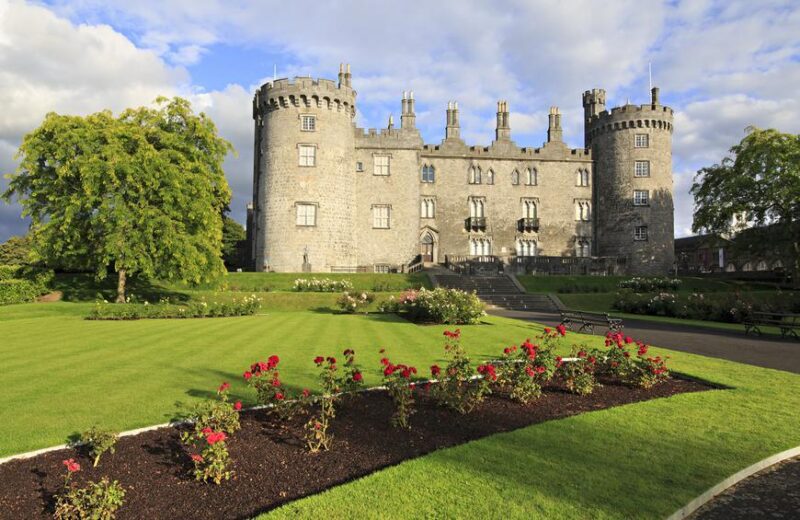 In a way similar to the Malbork Castle in Poland, the Trakai Island Castle in Lithuania is another unique, large brick castle in Eastern Europe. Located on Lake Galvė, the construction of the castle begun in the late 14th century and it was finished in the first decade of the 15th century. trakai was one of the main centers of the Grand Duchy of Lithuania. It had great strategic importance but lost its military significance soon after the Battle of Grunwald when the Grand Duchy of Lithuania was defeated by the Lithuanian-Polish army. 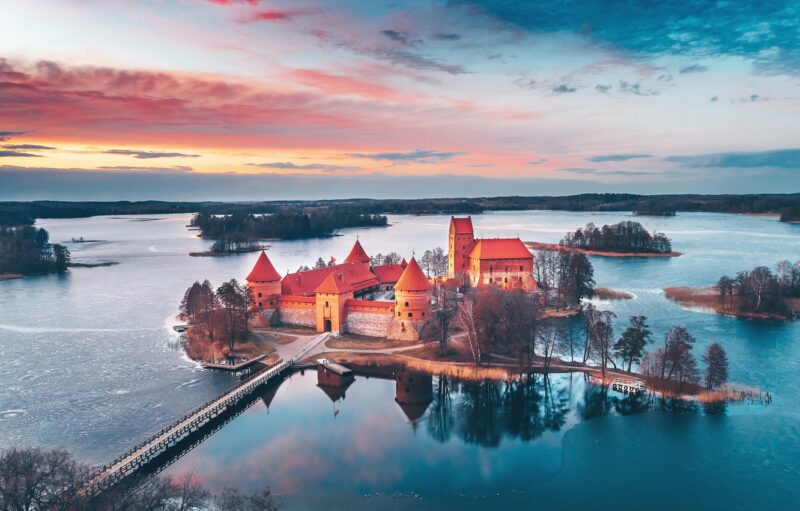 A romantic and almost fairytale-like is the Bojnice Castle in Slovakia. Unsurprisingly, one of the most-visited attractions in Slovakia. built in the 12th century and restored in the late 19th century, Bojnice Castle was first owned by Matthew III Csák, who received it in 1302 from the King Ladislaus V of Hungary. the castle is perched on a travertine hill and these days feature an artistic and historical museum within the castle walls. In late spring, International Festival of Ghosts and Spooks take place. 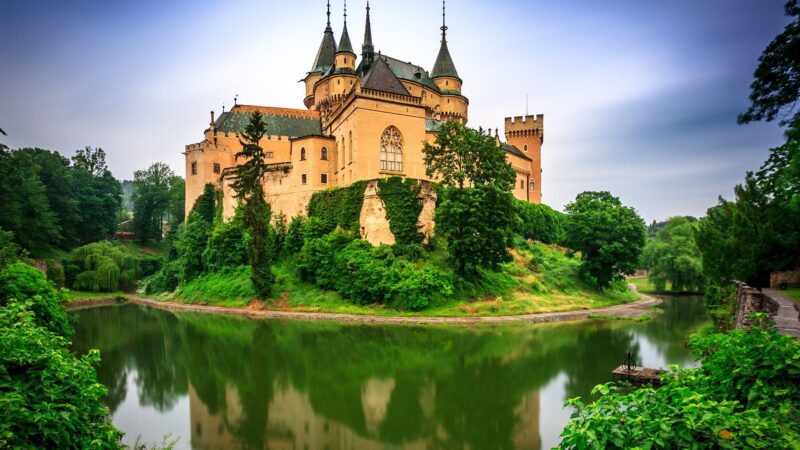 From fairytale to ghostly, the next in our list is the Hohenwerfen Castle in Austria. Surrounded by the Berchtesgaden Alps and the adjacent Tennen Mountains, this medieval rock castle lies approximately 25 miles south of Salzburg. the fortification was built in the late 11th century to serve as a strategic bulwark on top of a 500 feet high rock. Over the years it served not only as a military base for Salzburg rulers but also as a residence and hunting retreat. 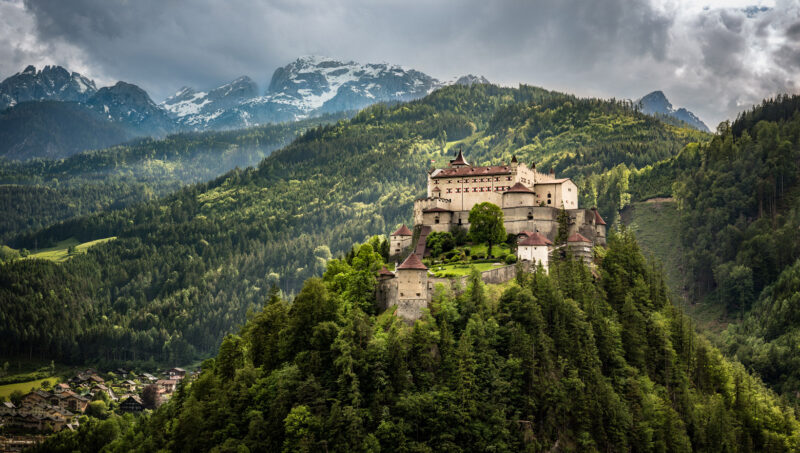